5 US multinational corporations set base in Kenya

Home - Business - 5 US multinational corporations set base in Kenya
Business

Similarly, Corteva a major American agricultural chemical and seed company and the American Tower Corporation (ATC) have set up regional offices in Kenya. The acquisition of 723 towers from Telkom by ATC and another planned acquisition in the pipeline will make ATC Kenya the biggest private tower operator apart from Safaricom.

The fifth is Emerging Capital Partners (ECP), an American investment company and one of the largest private equity investment firms in the world, who invested about US$34million to acquire a majority stake in Kenyan hospitality outlet – ArtCaffe.

All these five multinationals entered the Kenyan market in the last 12 months.

This surge of investment occurred on the back of plans for the American Chamber of Commerce (AmCham) Kenya Annual Business Summit 2019.

The AmCham Business Summit, to be held on November 4 – 5, 2019 at the U.N. complex in Gigiri is held in partnership with the Kenya and U.S. government as well as the U.S. Chamber of Commerce. It serves as an engagement platform for the U.S. and Kenya to find ways to increase two-way, trade and investment for mutual prosperity.

The 2019 edition of the Summit anchored on Kenya as the business hub and gateway into the region, will have an East Africa perspective, with participation expected from Tanzania, Rwanda, Uganda and Ethiopia in addition to Kenya and the U.S.

Speaking at a media briefing on the AmCham Summit at the Intercontinental Hotel in Nairobi, the AmCham Kenya CEO, Mr. Maxwell Okello explained, “The East Africa perspective in this year’s Summit is based on growing interest in the region as a single market. 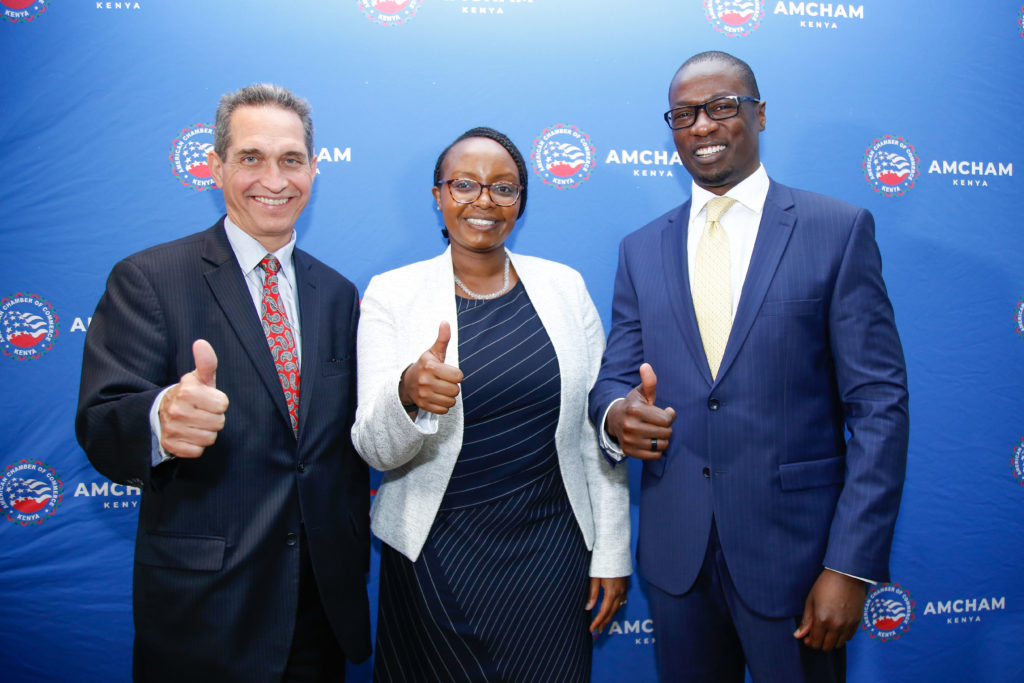 The program will feature doing business in-country forums, in addition to in depth sector forums on manufacturing, agribusiness, infrastructure, energy, health and the digital economy.

Mr. Okello further highlighted the importance of American and local private sector commercial engagement in driving growth and prosperity in the region and the role of the Summit in enabling this citing, “This year’s Summit provides a platform for direct business to business engagement enabling partnerships to develop and transactions to take place, expanding markets and catalysing business growth which is the key to job creation and economic prosperity,” he added.

Local business also stand to benefit from the Summit as it will give them the opportunity to meet various American companies, get to learn about opportunities and establish the right partnerships to advance their business goals.

Over the same period, other American companies that have been operating in Kenya have also increased their investments.

They include Microsoft who in May 2019 launched one of two, Africa Development Centres in Nairobi. The company has invested up to US$100 million in both centres and is looking to increase engineers across both centres to 500 by 2023.

In July 2019, Del monte announced investment worth $5.8million in a new state of the art packing facility that will expand its productivity as well as increase export capacity, creating 200 more jobs over.

Del Monte Kenya is one of the largest American employers in Kenya with a direct workforce of 7,000 and an additional 28,000 local jobs created indirectly by its operations.  Del Monte is also one of Kenya’s top exporters.

In 2018 Coca-Cola Beverages Africa unveiled a US$70million hot fill processing line at its Embakasi plant in Nairobi to serve the region that is set to enhance significantly the local sourcing of the materials used in the production of their beverages.

Even more U.S. companies are looking to enter Kenya. Currently Alternet Systems (ALYI) are planning to build Africa’s first electrical motorcycle plant under the ReVolt brand in Kenya. The deal, currently at industrial plant approval stage, when approved, will set the stage for the plant to assemble motorcycles in Kenya for sale across Africa.

“With a growing population, a young talented workforce and a growing middle class, the region presents numerous opportunities for investment and growth which we are keen to partner on, to realize the economic transformation we know is possible,” she added.

In 2018, over 500 delegates representing a mix of 140 U.S. and Kenyan companies participated in the AmCham Summit. In attendance were also 70 U.S. government representatives and business leaders including members of the President’s Advisory Council on Doing Business in Africa (PAC-DBIA) who were visiting Kenya on a fact-finding mission.

Commercial deals worth $100million were signed during the Summit witnessed by His Excellency the President of the Republic of Kenya, Uhuru Kenyatta and the former Under Secretary of Commerce for International Trade, U.S. Department of Commerce, Gilbert Kaplan.

Kenya and the United States have over 50 years of partnership with current bi-lateral trade grossing over US$1 billion. The U.S. stands as one of Kenya’s longest trading and development partners.