In March 2019, the office of the Auditor General named Makueni county government leading in terms of use of funds and development.
Already, voters from the county have written to the Directorate of Criminal Investigations to investigate theft of public money by county cartels under Governor Kivutha Kibwana. The governor’s wife and county First Lady name features in the multimillions scandals. The scams involves:
Thwake Bridge – It is a proposed bridge acrossing Thwake River to connect Muvau and Kalawa Wards in Makukeni county.
The project was funded by the county government between 2015 to 2017 financial year budget to a tune of Sh220 million.
It was contracted to Prime Quantifiers Limited Company owned by Paul Matheka. It has emerged, Matheka undertakes major projects of county like e-mail Bus Park and headquarters renovations and heavily bankrolled Kibwana 2017 reelection to a tune of Sh30million donation. It is now Matheka to get back his fortune during Kibwana final years in office hence taking all lucrative tenders at will. 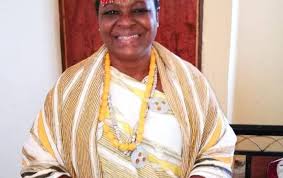 The company constructed only seven pillars clearly visible across the river and was paid Sh220 million in July – August 2018. A single concrete pillar cost over Sh30 million.
Water Drilling Rig – Records shows it was directly imported from India by the county government contrary to procurement regulations.
Further details reveal that a company by name Biomax was paid for the equipment and duty paid.
Over Sh40 million was used for the purchase of the equipment but to date the equipment is not registered with NTSA Tims account as required by law.
The machine has never functioned since 2016 to date. The firm won the deal courtesy of an in-law to the governor.
Shina Foundation – this foundation is owned by Nazi Kivutha the wife of Governor Kibwana.
It is contracted by the county government of Makueni through the department of gender to undertake family planning, youth empowerment and other activities on behalf of the government and is funded by the county government for example in June 6 2013, Nazi Kivutha received two cheques totaling to approximately Sh4,000,000 from department of gender for girls sanitary towels and dinner at Panafric Hotel. The foundation activities are not felt on ground despite the fact, another Sh2 million was later processed to facilitate operations.
Kalamba Fruit plant – Funded from 2013 to a tune of Sh1 billion. This is white elephant project that has no value for money and never benefited the people of Makueni. It has never produced anything for the market as it publicly purported to be. It is currently producing mineral water for unknown water company. No revenue has ever been declared from the plant and not accessible for media and public scrutiny

Babu Owino Refuses to Engage in Fist Fight With Jaguar