Central
Governor received donations and said he would continue working with local farmers and the private sector.

Kiambu County has received a shot in the arm in its fight against Covid-19 after over 50 companies made donations in excess of Sh135 million.

Kiambu Governor James Nyoro, during the launch of the Kiambu Covid-19 kitty at the county headquarters, said the county was still in dire need of Sh2 billion, which will go a long way in the fight against the deadly virus.
Nyoro said businesses had been adversely affected and the county government had waived cess fees to all food transporters following a directive by the Council of Governors.
Several businesses in Kiambu County have threatened closure and layoffs of employees over the pandemic period.

Many companies have been operating under tight Covid-19 regulations, which have seen many incur loses.
“We have received distress calls from the traders and farmers, most of whom sell chicken, milk, and eggs among others who have suffered after hotels closed and thousands lost jobs. Plans to boost these businesses are underway,” he noted.
Receiving grants
Richard Ngatia, the president of the Kenya National Chamber of Commerce and Industry, said macro and medium enterprises had begun receiving loans from the Sh200 billion deal signed with Equity Bank to cushion them from the economic shock.
Mr Ngatia noted that Kiambu residents were hardworking but like their counterparts across the country, the pandemic has hit most businesses.

“Our three million members across the 47 counties have started receiving the loans without collateral and the same is repayable within three years at lower interest rates,” he said.
The deal will enhance continuity amid mass closures of business due to the aftershocks of the pandemic.
Ngatia encouraged farmers to continue producing various agricultural products, adding that the government had negotiated with 12 African countries to buy Kenyan products.
Thika Cloth Mills CEO Tejal Dodhia noted that the cotton industry was one of the worst hit since the clothing industry was unable to get contracts due to the effects of the virus.
“Schools are our biggest clientele, but since the indefinite closure our work force has suffered greatly. I urge NGOs, hospitals and other organisations that rely on fabric to give business opportunities locally instead of importing,” she said.

SEE ALSO: In search of the spotlight, athletics takes leap of faith

The governor noted the kitty will also be used to streamline health care in the county, saying resources had already been overstretched due to overpopulation.
“We have a target of feeding 27,000 vulnerable households across the county, those living in informal settlements, arid and semi-arid areas. We have a huge number we are yet to reach. We hope this kitty will go a long way in helping as many households as possible,” Nyoro said.
“We are aware that Kiambu is the second largest county, with Ruiru constituency having half a million people. We already have a proposal to see a new hospital built in Ruiru.”
Additionally, Nyoro said Kiambu was a high risk area as besides being the “bedroom” of Nairobi, it was also a major transport corridor.
“We have an influx of patients in our hospitals most of whom are mainly from Nairobi and other counties. Being an exit county puts us at a higher risk of the virus.”
George Muhoho, the patron of the kitty and Eddy Njoroge, its chairman, lauded the captains of industries for their contributions.
Megascope Healthcare made a donation of Sh4 million, while Thika Cloth Mills gave Sh1.1 million.

I only differ with DP Ruto on ideologies,… 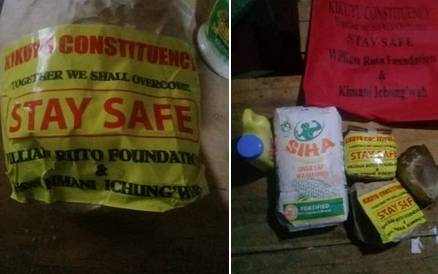 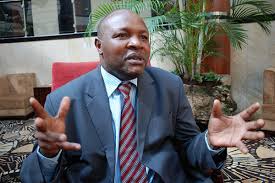