– His mother, Vicky Kiio was diagnosed with a rare bone disease that has confined her on bed for four years now

John Mututo had just landed his dream job as an accountant at the airport when his mother was diagnosed with a dreaded bone disease.

Vicky Kiio, John’s mother, contracted the disease during her prime age and time as a high school teacher and has since been confined on the bed for four years. 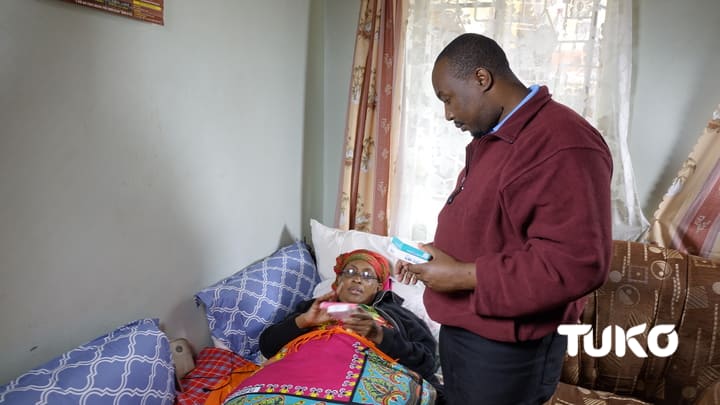 In an exclusive interview with TUKO.co.ke reporter Kelvin Philips Momanyi, John pensively recalled making one of the toughest decisions of quitting his plum job at Matsingberg company to take care of his ailing mother with hopes of helping her out of the bed as soon as possible.

” I was working at the airport in an accounting department in a company called Matsingberg but I was forced to quit the job and come home and start afresh to see how I can help her out of the bed,” John recalled 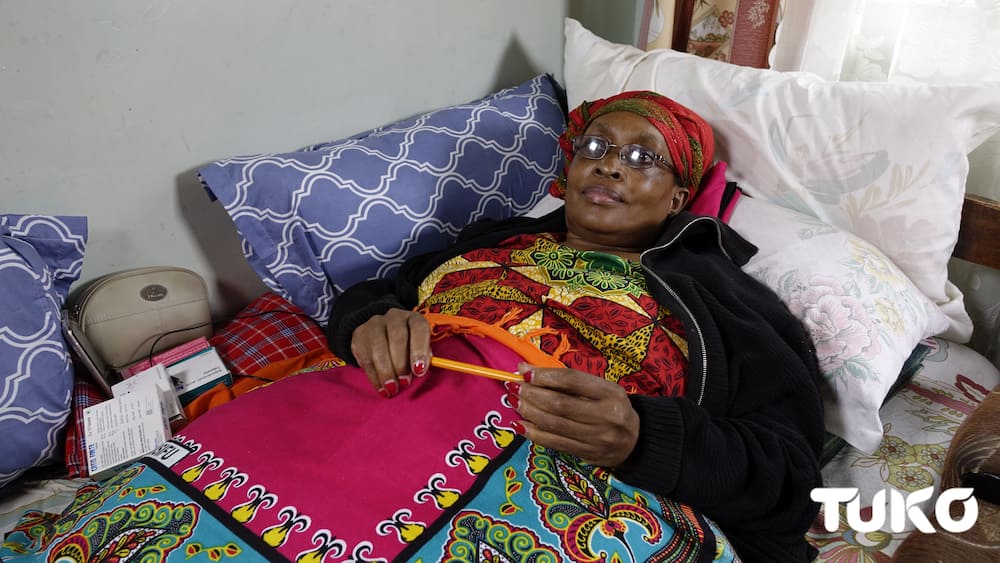 Vicky Kiio (pictured) was diagnosed with a strange bone disease that has confined her on bed for four years now. Photo: Edwin Ochieng
Source: Original

As the only child of Vicky, John does almost all the chores at home to ensure his mum gets the best of care, service and comfort that she deserves.

“There somethings as a man I cannot do for her like changing her, bathing and so forth. Those are the challenging things I encounter,” he said

On these sensitive roles, John is often assisted by neighbours and relatives who occasionally pay them a visit to check on Vicky’s progress. 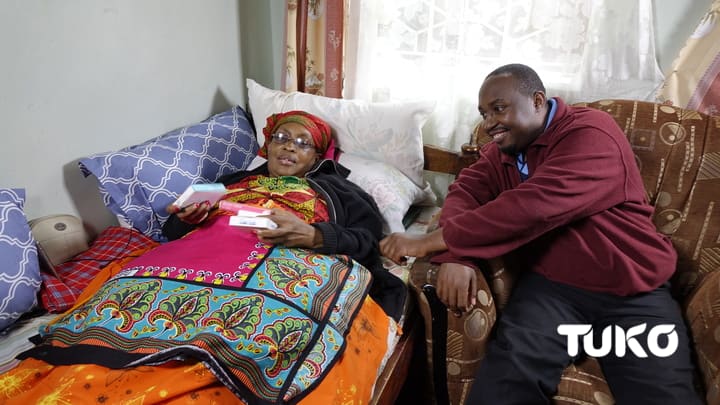 John with his ailing mother in their house in Nairobi. Photo: Edwin Ochieng
Source: Original

Vicky acknowledged the love and compassion her son has shown through the tough times she has been since contracting the disease.

With tears rolling down her cheek, the trained teacher described John as a wonder and super son that God blessed her with.

” A times I think about the boy I get affected so much because he the best, he is down on earth he doesn’t behave like other boys, he should be out with his friends doing his thing but he has sacrificed his life to be with me. I feel guilty but there is nothing I can do, I just leave my blessings with him, he is blessed already, said the ailing mother 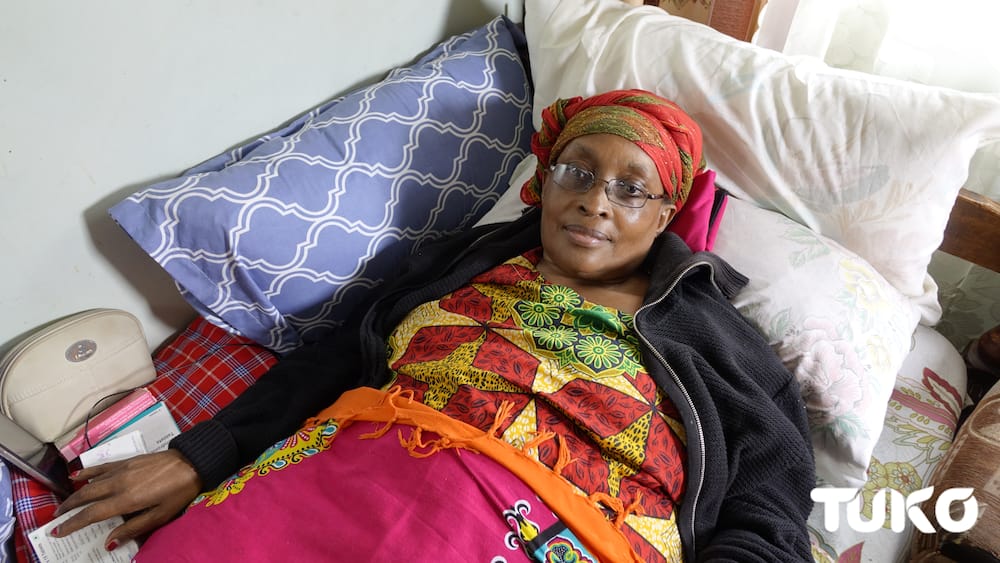 Vicky Kiio resting on her bed. She has been bed-ridden for four years. Photo: Edwin Ochieng
Source: Original

The widow was compelled to quit her teaching profession when she was diagnosed with the epidermic that was discovered late and could not be handled.

“It started with pain in the legs eventually I had to go and do an X-ray and they found that I had broken legs. During the procedure, they discovered the bones were very weak, they were spongy-like, the doctor even regretted why he had operated on me,” recalled Vicky

Since she has been bed-ridden for four years, the mother of one said she has developed a clot which she noted is a threat to her condition. 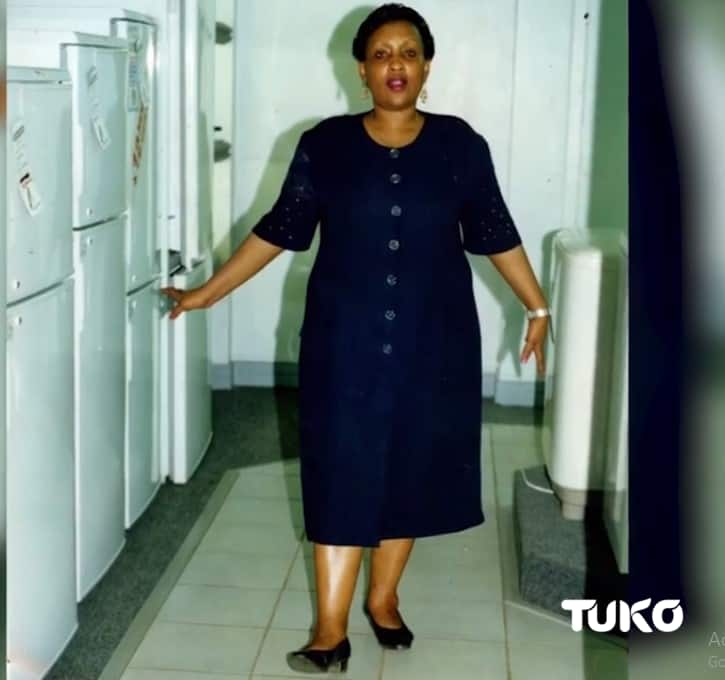 Vicky Kiio before she was diagnosed with the rare bone disease. Photo: Edwin Ochieng
Source: Original

Despite the ailment, Vicky has not lost hope and exuded confidence she would one day recover and embark on her teaching profession which she stated she has missed a great deal.

John who equally expressed confidence his mother will overcome the ailment asked well-wishers step in and help them overcome the menace.

“Any well-wisher out there who can assist I will be very grateful…even getting a wheelchair will be a great gift that God would have given us,” said John

Weight loss: The new fasting craze and why it might be bad for you