Cornered from all directions and deserted by key allies fearing state persecution, William Ruto is now crafting a new strategy that will see him remain a force to reckon with in the post-2022 government to cushion himself from criminal prosecution in case he does not win the presidency.

Part of the strategy includes backing constitutional amendments to be proposed by the Building Bridges Initiative to expand the executive by creating premier positions.

Initially, the deputy president was opposed to the BBI recommendations but it has now dawned on him that some of its proposals are advantageous to him as they will help him secure the support of regional kingpins such as Kalonzo Musyoka and Musalia Mudavadi.

Ruto has realised that the next government if headed by Raila Odinga or Gideon Moi will institute criminal prosecution against him to finish him politically and hence his desire to form a formidable alliance that will cushion him from such an eventuality.

His beef with Gideon is that he denied him a chance to visit late president Daniel Moi at Kabarak which is a pointer that given power the scion of Kenya’s second president will go to any length to politically finish the former Eldoret North MP. 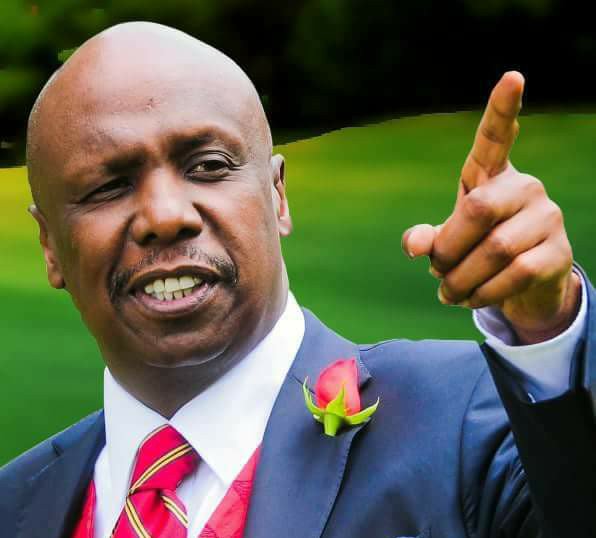 Ruto is taking the threats by Raila, who in the past has termed him as the high priest of corruption in Kenya who should be cooling his heels at Kamiti Maximum Prison, seriously as he knows the ODM leader has never forgiven him for teaming up with Uhuru Kenyatta in 2013 and 2017 elections to deny him victory. Ruto on his part retorted back terming Raila the lord of poverty who is happiest when the number of poor goes up.

Faced with a likelihood of going to jail if his political foes carry the day 2022, Ruto is now reaching out to Mudavadi and Kalonzo to form a formidable alliance that will see them secure majority seats in national assembly and senate in 2022 and be in government to protect himself. The 53-year-old Ruto is bringing on board Mudavadi and Kalonzo who have fallen out with Raila after the latter betrayed them by meeting Uhuru behind their backs, and according to their people, pocketed a cool Sh5 billion in the bargain. According to Johnson Muthama, Raila would not have gone alone if there was no money changing hands.

The betrayal caused the death of Nasa which the two leaders would have used to demand Raila backs either of them for presidency in 2022 in accordance with the memorandum of understanding they signed prior to the 2013 and 2017 elections.

Talk is rife that Mudavadi and Kalonzo do not have the financial muscle nor the conviction deep down to launch a serious presidential campaign. In fact, it is said, during the Mwai Kibaki succession race, Mudavadi benefited from the funding of Moi family and a section in Kibaki regime. Come 2017, he did not have any money to run for presidency only to join Nasa as a co-principal. The same is said of Kalonzo who only run for presidency once in 2007, and ended up VP for his efforts.

Ruto, insiders add, is even ready to drop his presidential bid and back another candidate knowing that at his age he will still fight for the seat in 2027 and 2032 elections.

The DP is convinced that Uhuru is frustrating him and has deployed the state machinery to cut short his ambition of assuming the presidency in 2022 with the tactical support of Raila.

The second in command, insiders add, is convinced the war on corruption was meant to cut his funding channels and the deep state – that comprises the military, police and high ranking government officials – has now started another scheme to paint him as a murderer unfit to lead the country. 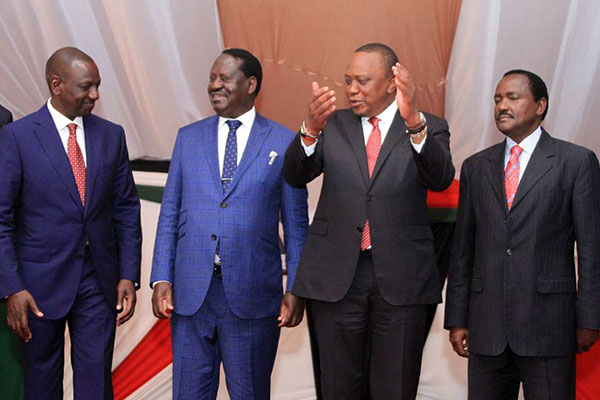 The deputy president, our sources add, believes spies have been planted in his office to leak sensitive information to the public to derail his presidential bid by painting him as a corrupt, murderous and evil individual who should be rotting in jail.

Some of the scandals that the deep state is planning to revive for Ruto’s prosecution include procurement at the Moi Teaching and Referral Hospital where costs were inflated to divert surplus money to put up a personal entity, attempted grabbing of Langata Primary School playground; Kenya Pipeline land in Nairobi and Prisons land in Upper Hill, Nairobi.

Insiders add that Ruto is aware Interior cabinet secretary Fred Matiang’i has been ordered to frustrate him to stop him from traversing the country to market himself ahead of the elections.

The fear of state persecution has seen the DP’s foot soldiers in Central Kenya start skipping his fundraisers the latest being at Giakanja Boys Secondary School in Nyeri, where a lower-than-usual turnout was witnessed. Locals who have been benefiting from Ruto’s excursions wonder why development is being sacrificed at the satanic altar of politics.

But Ruto, our sources added, is determined to remain politically powerful in 2022 and to this end is reaching to Mudavadi and Kalonzo to work on a common front.

His selling point is that the two leaders will not be accommodated in the Uhuru, Raila and Gideon Moi’s 2022 lineup since the death of Nasa left them without any bargaining power to demand Raila backs them.

The DP is telling the duo that the March 9 2018 handshake between Uhuru and Raila was not only a scheme to block him from succeeding Uhuru, who is serving his second and final term, but also meant to isolate both of them from the new political arrangement being crafted by the president and the opposition leader now squatting in government.

Following a series of secretive meetings, some of them attended by their aides, Mudavadi and Kalonzo have agreed to join Ruto’s team, at the right time. Their advisers believe Kikuyus and Luos can not beat the might of Luhyas, Kalenjins and Kambas and that Ruto will alos end up with a big chunk of Kikuyus as Uhuru has lost flavour in Kikuyuland where the masses say a snake’s small one is a snake in reference to Uhuru’s lineage that they say has seen them continue to live like they lived under colonial rule generation after generation falling ever deeper into more destitution.

The trio have also resolved to back the BBI by fronting proposals advantageous to them.

Last week, Mudavadi and Kalonzo made more or less similar proposals to BBI that Ruto had made when he gave a public lecture at Chatham House, in United Kingdom last year.

In his address, Ruto proposed a parliamentary system of government that would have an executive president, a prime minister, and an official leader of opposition.

He proposed that the president should be elected directly by voters while the prime minister position would be given to the person with majority in parliament.

The presidential candidate who would garner the second-highest number of votes would serve as the official opposition leader to check on the government.

When appearing before the BBI, Mudavadi echoed the proposals when he opposed the bid to create the post of a powerful prime minister in the changes to the constitution.

He also dismissed Raila’s clamour for a third tier of government, saying some politicians were pushing for it ostensibly to reward loyal governors serving their final term in office.

Mudavadi, who declared support for the BBI process, noted that a powerful PM’s post would lead to two centres of power, what was likely to be a major cause of infighting in government.

Insiders add that when Ruto met Kalonzo in Khartoum, Sudan last month, it was not coincidental as the public was made to believe but part of their negotiations for a joint ticket in 2022.

In Sudan, the DP was in the company of Kapseret MP Oscar Sudi and Kenya’s ambassador to Sudan Chris Mburu when he met the Wiper leader. 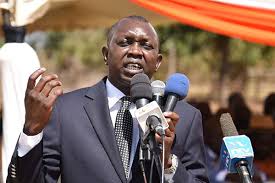 Prior to flying to Sudan, Ruto and Kalonzo had hooked up during a grand dinner hosted by embattled Nairobi governor Mike Sonko where they were snapped in kanzus as they enjoyed a meal with the governor.

The Nairobi meeting came weeks after Ruto and Kalonzo agreed to bury their past for the sake of national healing.

It also came when push for Kalonzo to form an alliance with Ruto had gained momentum with four Ukambani MPs describing it as the “best opportunity” for the community to be in government.

MPs Victor Munyaka (Machakos Town), Vincent Musyoka (Mwala), Nimrod Mbai (Kitui East) and Kangundo’s Fabian Kyule had told Kalonzo to consider working with Ruto, adding he stood a higher chance of ascending to the presidency by working with the DP.

Earlier, Muthama had disclosed that he would organise a meeting of politicians and professionals from all regions in Ukambani to discuss how they can cooperate with Ruto in the 2022 election but Kalonzo, however, distanced himself from the remarks.

Ruto also made overtures to Kalonzo during the funeral of former cabinet secretary Cleopas Mailus’s mother in Machakos when he told him to try a different formula as his support for Raila in the 2013 and 2017 elections failed to yield fruit.

For Mudavadi, the deputy president made his intention well known when they met during the installation of Kericho Catholic Diocese Bishop Alfred Rotich in Kericho town.

Ruto pleaded with the ANC leader to join him in forming a political alliance to push for the presidency in 2022.

The meeting marked the first time the deputy president was personally seeking out Mudavadi, who has also declared his interest in running for the presidency in 2022.

In his previous tours in the western region, considered Mudavadi’s political stronghold, Ruto had kept off the subject, leaving it to his lieutenants such as former Kakamega senator Bony Kwalale to reach out to the ANC leader.

What You Should Do to Reduce Coronavirus Disease Infection Chances

Why I went ‘Chini Ya Maji’ after painful marriage break up

Kenya: JKIA and Other Airports Disinfected to Slow Spread of COVID-19 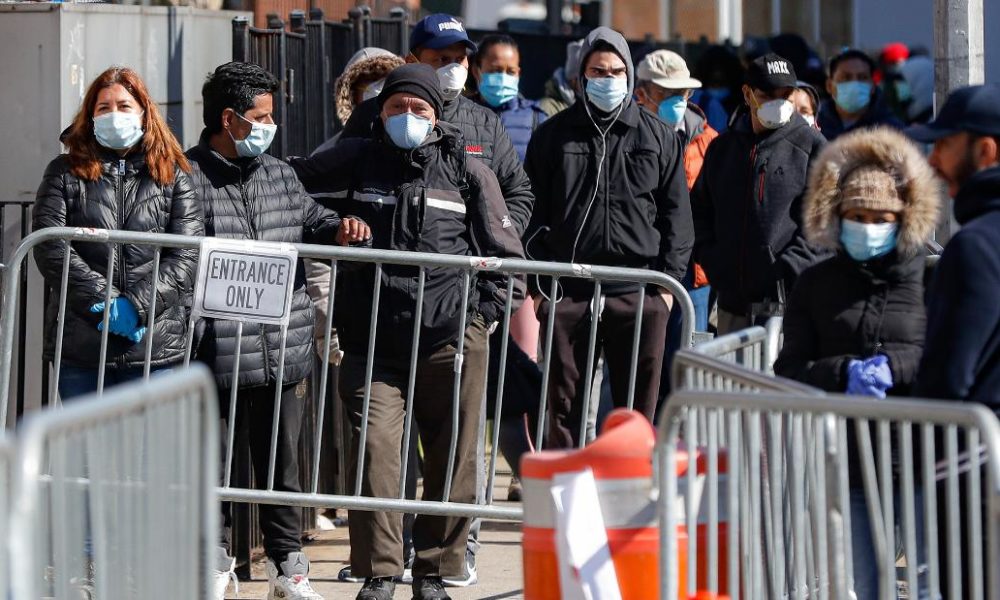 Why I went ‘Chini Ya Maji’ after painful marriage break up

Kenya: JKIA and Other Airports Disinfected to Slow Spread of COVID-19