Cases of immorality involving members of Nyamira county assembly have continued to rise, putting the house of integrity on the spot and in question.
Investigations carried out have established that immorality among MCAs themselves, and the staff has gone a notch higher as the scramble has gone beyond the limits.
It is nearly now becoming official that all married women who are MCAs have love affairs with their male counterparts but save for two old mama’s who have refused to give in to the demands of the randy male MCAs possibly because of their age which is beyond repair.
Staff members have also become easy catches for the MCAs leading to some of them being married to some of them.
Source confided to this writer that the women and women staff members are engaging themselves in the illicit sex as a business but not off love.
Recently, three married women fought over an MCA a factor which prompted the county assembly powers and privileges committee which is chaired by the speaker Mofatt Teya to the disciplinary action be taken against the MCA and the women involved.
More serious, one of the staff members involved in the love saga is a wife of a senior SDA pastor serving in Nyamira county.
It is also said that some members of the county assembly are luring the young girls working in the assembly with money before having sex with them.
One reliable source in the assembly said two MCAs have each more than three women who are married and working as staff members in the assembly for the purpose of exploiting them sexually.
The same source revealed that when the MCAs go out of the county for official committee meetings, they use such times in influencing the selection of their lovers who accompany them thus using the occasion for love making.
Some male MCAs have in several occasions accused one another openly in the course of scrambling over their mistresses. 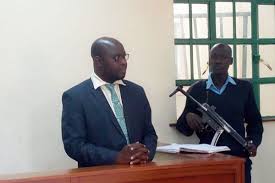 Impeccable sources have revealed that some MCAs have gone as far as buying vehicles and plots for their loved ones in exchange of sex.
According to the information availed to Weekly Citizen, most respected MCAs were the ones who are notorious in sex scandals in the county.
Married women MCAs and staff are currently having problems with their husbands because immorality incidents which have engulfed them.
It is said that two women are currently operating from outside their marital status after being implicated in scandals with some MCAs.
The male MCAs have also extended their sexual campaign to prostitutes and school, a factor which has also caused an uproar and outcry from members of the public.
Magwagwa MCA Fred Omayio was arrested and arraigned in Nyamira court a school.
Omayio after spending one week in the police cells was finally released on a bond of Sh300,000 or a surety with the same amount.
Omayio who was brought to court under tight security for the second time was arraigned before the Nyamira Resident Magistrate Alice Towett, charged with defiling a girl aged 17.
According to court documents, the girl is a Form Four candidate at a Kisumu school.
The MCA was charged that on Monday September 2 and 3, he committed an indecent act with the girl.
He was also charged of engaging in sexual intercourse with the girl against the law.
He pleaded not guilty.
His advocate Haroun Ndubi, had applied to the court to have the MCA released on free bond, but the magistrate postponed the ruling saying she did not have enough time to author the ruling over the application for bail.
Before the lawyer could place the application, state counsel Desmond Majale had also told the court to put the suspect in custody until the victim has testified.
The prosecutor cited attempts by Omayio to reach out for the girl before the matter could be taken to court.
Towett ruled that the suspect had constitutional right to be released on bond or be given cash bail .
She noted that the application by the prosecution to continue holding the suspect in the cells did not hold water because it had failed to provide enough proof that the suspect could interfere with the witnesses.
The defence team led by Ndubi pleaded with the court to set an earlier date for their client as the matter was also involving students who need to be school preparing for her four national examinations which kicks off mid next month.
Towett fixed the hearing date to be on October 3 and 4.
However during the time he was arraigned only two members of the county assembly came to team up with.
Those who turned up were Charles Getabu (Bomwagambo) and Duke Omoti (Kiabonyoru).
Speaking to Weekly Citizen outside the court, Barongo said that he had turn to be with his colleague because he doubted the charges were drummed against him.
Nyamira county assembly sessions were on Wednesday afternoon last week disrupted after chaos erupted following an order by the deputy speaker that two members who had been barred from attending sessions before the house went on recess last month be ejected out.
Trouble started when the deputy speaker Robinson Mocheche who was chairing the session declared Ekerenyo ward member Thaddeus Nyabaro and nominee Violet Nyakoora who were already seated in the house, as strangers and ordered them to move out.
The two had been suspended for three months respectively by the house powers and privileges committee over what it termed as gross misconduct relating to sex scandal in the assembly.
Nyabaro was further slapped with a fine of Sh100,000 while Nyakoora was also fined Sh50,000 and removed from all the house committees for a period of two months.
Nyabaro declined to move out saying his suspension was malicious and political and therefore he was not ready to move out.
Business in the house came into a standstill as Nyabaro and deputy speaker exchanged harsh and bitter words .
He said that he had already written a petition letter against his suspension and therefore he was there to stay until his petition has been heard and determined.
The deputy speaker finally ordered security orderlies to move him out by force of which they did.
For Nyakoora, she resisted her removal by clinging to her seat shouting loudly making the deputy speaker to call off the session