There is just something about the art of music that sees guys have a string of baby mamas. It´s like it comes as a package and none can really avoid it.

From gospel to secular, musicians to DJs. It´s happened.

Veteran gospel producer J Blessing so far has three baby mamas that were are aware of: Chantelle Blessing, Avril and Mwende Macharia.

However, another keeps popping every time we lay down our heads to rest.

So now, Kenya´s supreme vocal queen Laika has gone public about having sired a child with the top video director, before he abandoned them both. 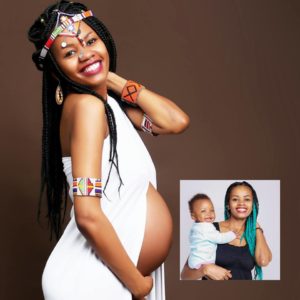 A daughter who is now aged 4. Up and close on milele FM, the Kenyan songbird opened up:

I was in a relationship with J Blessing but he left me. I was hurt, so I took a break.

Even after going through pregnancy all by herself, soon after delivery till date, J blessing has gone dark in regard to his daughter´s upbringing.

Yes, he denied the pregnancy, I do not like talking about this issue. He helped for a while after the delivery but for now he does not do anything.

Just early June this year, the singer said she quit music due to depression. Adding:

I got depressed after giving birth and I felt like I was under a lot of pressure. I most definitely needed a break.

Since then she has gone under, to focus on her child and her well-being but has now opened up on her feelings that have long been suppressed within her.

On a day like today, you made your way into the world in style. I celebrate you baby girl and I want to tell you those favorite words… You´re my best friend. We always want the best for you. We will always celebrate you. And we will always show you how much we love you so you can love others with the same intensity. 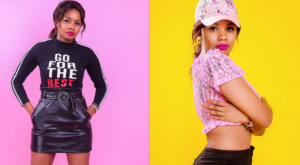 An online discussion soon after erupted early in the week as Kenyans commented over the allegations filed against the music producer.

This is after an undated video emerged on Twitter, showing Laika confessing that J Blessing had indeed impregnated her. 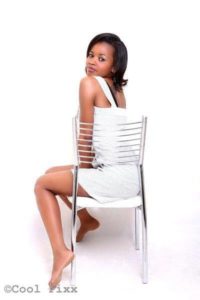 Shots were fired in J Blessing´s direction. Right for shaming him for neglecting his own responsibility, to inflicting pain on the music sensation.

Others actually told him in white and black, to take responsibility for his actions. Period!

However, a section of the fans rubbished Laika´s accusations insinuating that the singer was just here for attention. 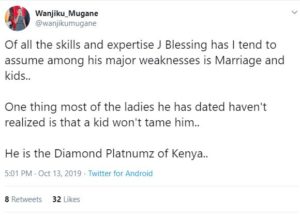 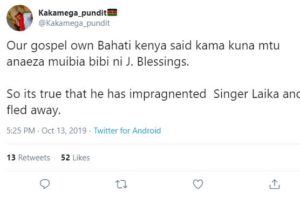 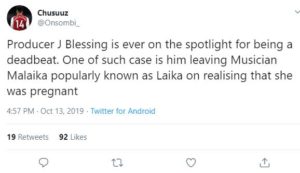 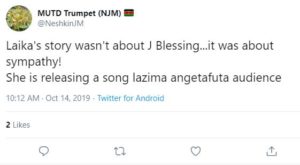 None of them has however responded on the same.

In a past lengthy yet adorable post, Laika penned how much she prayed for, right from having a family, to joining university, to having a wonderful life partner, to travelling the world. 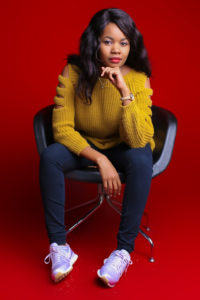 Most importantly, her prayer was to be a good mother to her daughter, which she believes she has done diligently.

But so far, she remains thankful for family, friends and most of all, her 4 year old baby girl.

Kamati ya roho chafu! Why being a rich kid like Ngina Kenyatta is hard