Trouble is looming at Kenya Reinsurance Corporation (Kenya Re) board of directors after American rating agency AM Best downgraded the long term issue credit rating (L-Term ICR) to negative from previous stable.
Industry players report reveals Kenya-Re’s poor technical and management in recent years. The report shows Kenya Re as being weak compared to regional competitors.
In 2019, the firm reported non-life underwriting loss of Sh2.6 billion while in 2018, the loss was Sh1.1 billion. 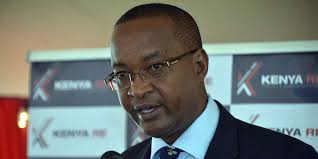 Ever since the report was released, a section of the board has taken issue with chief executive officer Jadiah Mwarania. In March, 12 2018, Kenya Re board under then boardchairman David Kimei terminated Mwarania contract that was to end in April 21 2021.
The matter moved Employment and Labour Relations Court. The court ruled that the matter be settled out of court. The CEO wanted the court to restrain Kenya-Re from enforcing its letter that sought to terminate his contract.
In the case, Mwarania had argued to be still in office up to April 21 2021.
His contract had been renewed in 2016 for a period of five years and the insurance company terminated the contract in total violation of his constitutional rights.
Mwirania joined the company in 1990 in the position of Managing Trustee and was subsequently promoted through various ranks before he rose to the position managing director in 2012.
“In June 2017, I received a directive from Joseph Kinyua Chief of Staff and head of Public Service regarding appointments to the board and in compliance with the aforesaid directive appointments, I did undertake all that was required,” reads part of the affidavit.
In its response filed in court, Kenya-Re claims that prior to the termination, various concerns had been raised on the managing director’s shortcomings, and the same was not adequately addressed by Mwarania.
“They said concerns were not only based on internal observations but also on independent reports by external sources,” then Kenya-Re board chairman David Kimei stated.
Kimei further stated that Mwarania did not address the weaknesses leading to the downgrading of the corporation’s rating from a B plus to B plain.
He says that the downgrading meant that the corporation had moved from a re-insurer that had a good ability to meet its ongoing insurance obligations to one that is vulnerable. The same negative report has also been reported by the American firm questioning the competence of current managers.
The court ruled in favour of Mwarania and is now in office with a new team of directors. The chairman is Chiboli Shakaba. Kemei is non-executive director together with Thamuda Hassan, Jasper Mugambi, Anthony Munyao, Felix Oketch, Maina Mukuma, Erick Gumbo, Jennifer Karina and Charles Kariuki, the co-operation’s secretary.
Insiders say that the CEO has perfected the art of protecting his contract that ends in 2021 by planting his henchmen in strategic positions. Two acting positions are being held by his tribesmen raising eyebrows. They are acting manager, business department Longin Nterere with Sylvi Karimi, acting manager corporate affairs department.
Sources say the CEO does not get on well with senior managers who he believes were lobbying to get his post when the contract was terminated.
Michael Mbeshi, general manager property and administration was being groomed by Kimei to take over as CEO.
Nicodemus Gekone (manager investments department) together with Martin Mati (manager research and development) are viewed suspiciously by the CEO. The duo are said to have been unhappy with his return as the top man at Kenya-Re John Rika (property) is also on the list.
Other managers are Beth Nyaga (operations), Jacqueline Njui (finance and investment), Arthur Levry (West Africa region), Suleiman Tembo (Zambia region), Tadeo Nsubuga (Uganda), Johnson Ireri (internal audit), George Njuguna (ICT), Gladys Musyoki (supply chain), Sammy Kaaria (risk), Sally Waigumo (human), Elizabeth Omondi (business), Alice Mbuyu (claims), Peter Angwenyi (office co-ordination), Teresia Kenya (life business), Jane Odipo (marketing) Philip Sanda (actuary), Judy Njuguna (archives), Consolata Kihara (safety), Samson Mudogo (chief account), Hilary Wachinga (credit), Mumut Ole Sialo (Zambia), and Lucy Kagwiria (West Africa).
Weekly Citizen has information the CEO is grooming Njui, manager investments and finance to take over as CEO, further complicating matters at the ailing institution.

Ziwani Residents raise concern over being skipped in food donation