The National Assembly Committee on Environment has stated that sh38.4 Billion that the government made in advance payments of five stalled and collapsed dam projects cannot be recouped. 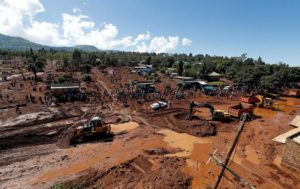 According to the committee, the construction of the five dams has either yet to start, sluggish development, stalled altogether or their contracts have been terminated.

The records indicate that the following dam projects have received these advance payments;

The Committee has also raised concerns regarding the ongoing construction of Chemususu Dam and the Northern Collector Tunnel.

Kimwarer and Arror dams that the Treasury made advance payments of Sh19 billion, that led to the prosecution of suspended Treasury Secretary Henry Rotich, including Sh11 billion debt insurance, Sh4.6 billion as loan interest and other costs were not part of the Environment Committee’s report.

“The Auditor-General should institute a performance audit to inquire into the circumstances under which Athi Water Works Development Agency made the Sh4 billion advance payments to Chinese firm AVIC before acquisition of the requisite land for implementation of the Karimenu II Dam, leading to loss of public funds through idle time,” Kareke Mbiuki, who chairs the committee, said in the report on the Inquiry into the Status of Dams in Kenya.

The committee has also asked the government to urgently engage the Italian firm, CMC Di Ravenna, to secure a subcontractor to complete the Sh28.9 billion Itare Dam project since the main contractor filed for bankruptcy in Italy.

“This will save the project from permanently stalling. There is urgent need to renegotiate the terms of the loan to allow for a subcontractor to complete the project,” Mr Mbiuki said The committee said the broke Italian contractor had raised bills totalling Sh4 billion at the time of filing the report on October 11.

According to the committee, work progress at Thwake dam meant for hydro generation, irrigation and providing water for domestic use is sluggish yet the Chinese contractor has already received sh7.4 billion.

Thwake project is fully Chinese owned as the report noted that it is handled supervised by Chinese contractors. No local professional has been included in the senior positions nor in the oversight of the project.

In January 2018, China’s AVIC ventures received Sh4 billion to construct sh26.8 billion Karimenu II dam. On the ground, there is zero of work recorded after 2 years.

In the Sh6.8 billion World Bank-backed Northern Collector Tunnel, the MPs want the Auditor-General to conduct a special audit of the Kigoro Water Treatment Plant that cost the taxpayer an additional Sh4.5 billion.

“The auditor should establish if indeed the country realised value for money and report to Parliament within six months from the date of adoption of the report.”

China’s Sino Hydro Corporation was awarded a contract to construct sh14 billion Mwache Dam. They valued the land at the site at sh1.8 million per acre yet they are paying land and property owners Sh550K. The committee has proposed to block any advance payment to the firm.

The committee established that taxpayers lost Sh1.6 billion through an arbitral award to a contractor after terminating the Umaa Dam contract.

Taxpayers also lost Sh2.4 billion in the government-funded Sh3.3 billion Badasa dam. The Chinese contractor terminated the contract with only half of the works done.

Total and Tullow to sell stakes in Kenyan oil project amid delays : The Standard

Why Tanzanian artist are slowly warming up to Kenya

Total and Tullow to sell stakes in Kenyan oil project amid delays : The Standard

Why Tanzanian artist are slowly warming up to Kenya